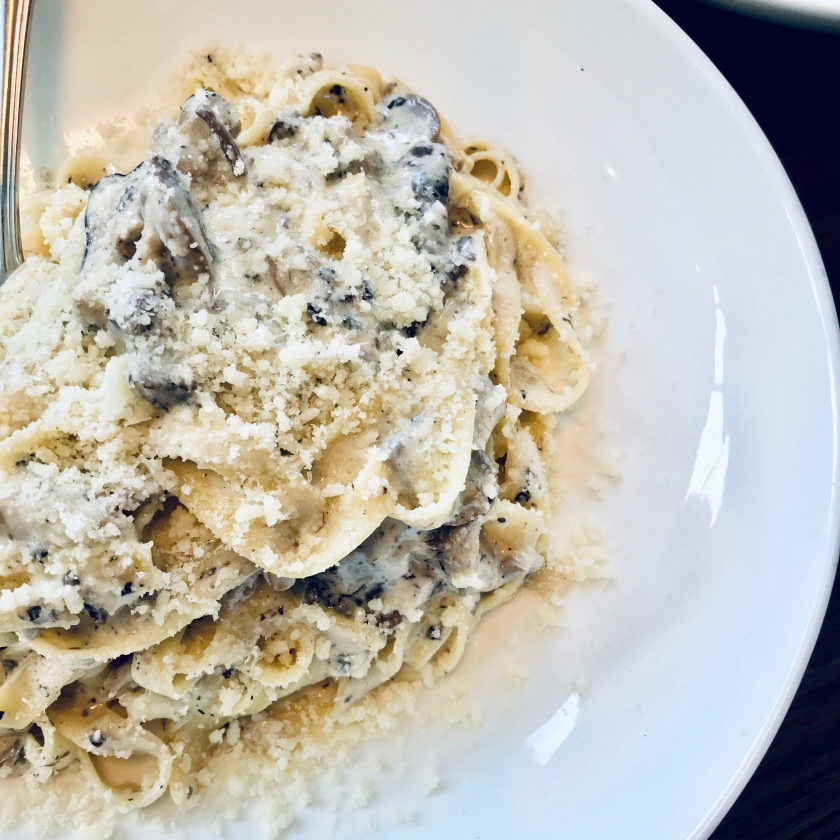 So So is not bad. So So is mediocre. So So is average and there’s nothing wrong with average. In fact, I often get called average and I am not mad about that.

A Saturday night in June found Ian and I celebrating a mish mash of belated events for his step-father and to take a break from the series of Malaysian eateries we’ve been hitting up, we opted for Sopra Sotto on Commercial Drive.

Sterile clean, airy and bright, while all things I enjoy, is a slight departure from those earthy, cozy, and free-spirited vibes I’m so used to on The Drive.

I’ll start with the stellar because it’s all I really think is worth mentioning so do all of us a favour and order the Caserecce e Tartufo ($22). House made pasta twists dancing in a creamy truffle sauce with an array of mushrooms and sprinkled with parmigiano had me wishing I had ordered the entire plate to myself rather than deciding to five way split. You only learn by doing though, or something silly like that.

I am one of those heathens that enjoys it when all of my food mingles merrily on my plate so you better believe all the dishes we ordered were immediately scooped onto my plate and spent the entire time touching one another.

The Salumi Board For Two ($20) and Antipasto Misto For Two ($22) kicked our meal off. Both served with fresh focaccia, I don’t have too much to say about either of them except for that the salumi board came with an assortment of salumi and the antipasto held an assortment of antipasto. (For those who are really curious, this included nibbly bits like olives, artichokes, anchovies and cheese.)

Blown away I was not, but it was not bad. You might say it was so so. The focaccia was on the slightly dry side and admittedly, I did not care for it.

Along with the truffle pasta, we ordered the Tagliatelle in Sunday Sugo ($22) and the Chitarrine al Ragu ($19). I had been experiencing big time cravings for bologonese in the week leading up to this dinner so I had big hopes for the Ragu, being a spaghetti tossed in an bolognese sauce.

I cannot confidently say those hopes were lived up to on account of muted meaty flavours, but they also were’t completely dashed so I am feeling pretty so so about it all.

The hearty tagliatelle definitely carried strong Sunday night vibes in all its long noodled beefy short rib glory. Nothing about this blew me away but I also wasn’t saddened so here we are again – so so.

Caesar Salad ($10) of course for health and balance, and with a nice amount of creamy dressing and homemade croutons, this was pleasantly so so.

Let’s talk pizza now because if anything fell short of so so for me here, it was this. I’m just going to say it – if pizza is really what you’re heart is after, please do not bother coming here at all.

Porchetta e Friarielle ($20) is a pie featuring porchetta, Italian brocolli, and mozarrella. It could have been anything on that pizza, or nothing at all for all I could tell because this is the closest I’ve come to flavourless pizza in a long time.

The pizza situation was redeemed slightly however, by the Rucola e Prosciutto ($21). Contrasted against the other bland mess of a pie, this one with its refreshing cherry tomaties, punchy shaved grana cheese and proscuitto crudo really salvaged the day.

An evening of assorted carbohydrates later, would I return? While So So is not terrible and I definitely do not hate So So, in a land like ours where delicious pizza and pasta are a plenty, in the end – a So So for me is going to have to be a No No, really.